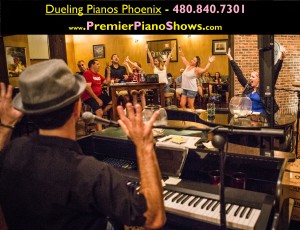 Dueling Pianos is a concept most often remembered in Phoenix at Arizona Center’s “Little Ditty’s” and more recently at Mill avenue’s “Big Bang” and Westgate’s “Shout House.” The concept features two baby grand pianos facing each other, with experienced entertainers getting the crowd to sing, clap and dance along to their piano antics.

Dueling Pianos is a unique entertainment concept in that set lists are determined primarily by audience requests; therefore, no two shows are ever the same.

Nearly every night, dueling piano players are inundated with such popular requests as “Brown Eyed Girl,” “Great Balls of Fire,” “Don’t Stop Believin” and “Piano Man.” Occasionally, audience members try stumping piano players with requests as “far out” as “Enter Sandman” and “Baby Got Back” only to be surprised by flawless renditions by skilled musicians.

#YourPianoMan Randy Keith is a Los Angeles-area native and has traveled extensively around the world prior to landing in Phoenix. He features his experience, wit and hints at his vast repertoire of thousands of songs in this Sunday’s segment.

To explore the AZ Family Channel 3 Lineup, click here.
For details on the New Years’ Eve show at the Social Box, RSVP here

Click here For a list of dueling pianos performances by Premier Piano Shows.
Including tonight’s performance at The Harp Pub in Mesa

To book PremierPianoShows Dueling Pianos at your event,

Dueling Pianos all over Central Florida!

Love Is In The Air (and Music) This Weekend!

It’s Valentine’s weekend and time to celebrate love with that special someone! We have the perfect way to do it — hang out with our

Looking for something safe and fun to do on New Year’s Eve in or near Orlando, Florida? We have an idea, how you can enjoy

Call/text, E-mail us, or fill out our contact form so we can start a conversation!
Watch our Online Show

We will update you on where you can see us perform live piano shows!